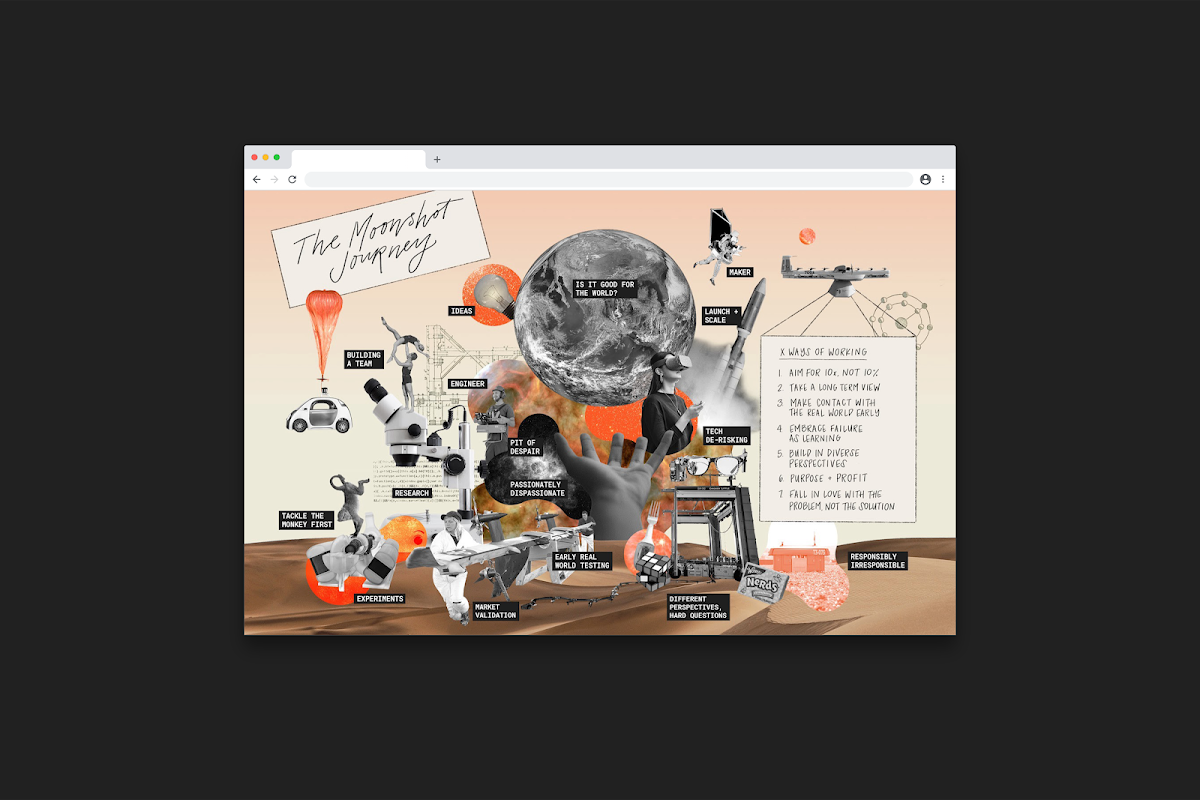 10 years ago Larry, Sergey, and Sebastian offered me the chance to run a grand experiment — to build a moonshot factory. Initially we only had a fuzzy idea about exactly what X was going to do, but we knew we wanted to create an organization that could invent and launch breakthrough technologies that would make the world a radically better place. And we knew X could play an important role for Google, in reaching beyond its core Internet business and beating the innovator’s dilemma. I agreed to co-found X because I’ve always wanted to create an organization that could repeatedly generate breakthrough innovations filled with hyper-creative people and weird, out-there thinking.

What motivated me then is what motivates me now: humanity is choosing to keep much of its potential off the table, undeployed, and underutilized. Many people go to work at jobs that aren’t designed to be fulfilling, and many more don’t get the chance to contribute at all. Meanwhile, many powerful organizations are forced to focus on their own profitability and short term goals at the expense of everything else — leaving the status quo intact, or at best only making the world incrementally better. Yet the massive problems facing us this century need the widest array of minds, the wildest imaginations, and enormous commitments of time, resources, and attention.

X as a whole is our prototype solution to this need. We’ve been trying to make a factory for radical ideas, technologies, and businesses that will have a huge positive impact, and for employees who maximize their creativity, talent, and personal sense of purpose. And we hope to prove that “good for the world” can be financially rewarding, so that more organizations are inspired to operate like this. 10 years into this experiment, we’re proud of our work so far, whether it’s the many standalone companies and Google products that started at X or the hundreds of alumni who carry X DNA into many different companies and industries. That said, there’s still more we can do.

As we hit our 10th anniversary, I’ve been taking stock of how we’re doing at building an organization that unleashes radical creativity while remaining relentlessly focused on real technologies and real-world impact. What I’ve come to realize is that our main cultural battle is against fear and the strong gravitational pull toward conventional ways of thinking and behaving. All of us have been conditioned for years not to fail, not to be vulnerable, and to minimize risk. So my number one job is helping Xers reset and free themselves from these invisible but pernicious constraints so they can free up their potential. And it’s a mission I want more leaders to take on, so below are some of the lessons we’ve learned about helping teams break away from the ordinary and into the unexpected and unknown.

#1 Stop thinking you can predict the future. This is one of the biggest myths perpetuated by investors, media, and the entire “futurist” industry; no one is much better than random at knowing what businesses and products will succeed in the long run. Our approach: Try audacious things and figure out as quickly as you can when you’re wrong.

It’s possible to predict general territories where new opportunities are more likely to lie; for example, we think machine learning has the opportunity to unlock moonshot-sized opportunities in areas like agriculture, drug discovery, and the development of new materials. But you actually have to jump in and start trying things in order to get the details of that “Ah-ha!” breakthrough right. Sometimes you learn some harsh lessons; that’s the point. Sometimes it takes dozens of iterations; one team at X right now is working on improving how people hear, and they explored 35 different ideas before they found the one we’re going to pour fuel on.

#2 Take a long term view — it changes everything. We’ve deliberately chosen to work on hard problems whose answers are 5–10 years over the horizon. This gives us space to explore and experiment and learn more deeply. Taking the long view also enables us to think through the implications not just the applications of what we’re building, and ensure we’re taking into account the needs of many different people affected by any new technology. For example, we decided to tackle the longer, harder path of creating fully self-driving cars instead of launching a partially autonomous “freeway assistant” feature, because we wanted to help people who couldn’t drive at all and make roads as safe as possible. By thinking long term, we can optimize individual projects and our portfolio for as much positive impact as possible, even if we can’t know exactly which bets will work out in a big way.

Early tests of our self driving car

#3 Carve out space for creative and weird souls. Willy Wonka had to build a chocolate factory to house the Oompa Loompas, because they struggled to survive in the wild. And innovators and dreamers often can’t thrive in typical organizations. Their constant “what ifs” and “why does it have to be this ways” can be irritating for organizations trying to lock in an execution plan and meet quarterly targets. As a result, their creative spirit is slowly bent over time to serve the status quo, or they leave, maybe branded as troublemakers (ironically, this often happens when the bosses hire “innovation consultants”). Don’t get me wrong — execution matters, especially when you’re operating at scale. But radical innovation needs a different cultural environment than product delivery does. That’s why X was set up away from Google. It’s why our moonshot projects leave X once the focus shifts from experimentation and prototyping to shipping products reliably and scaling a business.

Save the Oompa Loompas!

#4 Dream like a child, test like a grownup. You can get way further than you think just by being optimistic enough to try. You’d be surprised how many people find motivation and joy in a ridiculously hard problem, especially if it has a magical-sounding solution. This is why we’ve often said that 10X can actually be easier than 10%. Before it seemed possible, teams at X believed in the possibility of self-driving cars, self-flying delivery drones, and stratospheric Internet-beaming balloons, and now all of these things are becoming real. We choose to see the world differently and keep our child-like sense of wonder and boundless opportunity. At the same time, we hold on to our skepticism as we run tests and learn to look dispassionately at the results, so we’re ready to change course or walk away when that is the right thing to do.

#5 Look for holy s**t moments — they can get you further than clear objectives. We send our projects off to explore new spaces without heavily quantified goals because we want them feeling free to find the intriguing paths that lead to the biggest surprises. But it’s hard to resist the allure of a clear milestone because humans dislike uncertainty and viscerally feel the downsides of failure far more easily than we can imagine the rewards of transformative success. To counteract this, we tell teams we want them to try a bunch of experiments and come back when they’ve found something that makes us say “holy s**t.” A robot navigates up to a table and uses its arm to grasp and sort recyclables from trash. Or a four-wheeled buggy rolls through a field, targeting and zapping weeds with a laser. These aren’t products — but they are demonstrations from a couple of our current projects of new technical capabilities that are harbingers of their ability to do even more interesting things with robotics and in agriculture in the future.

The computational agriculture team tests in the field

#6 Cultivate the ability to be passionately dispassionate. While we can’t predict the future, we’re trying to invent it efficiently, to maximize the impact of our effort and resources. So it’s absolutely necessary to be intellectually honest and kill things that are pretty good (even if we love them!) so we can move on to even better opportunities. It’s something we keep trying to get better and faster at, though it’s deeply unnatural. It’s never easy to kill projects. Over the years we’ve had to disband dozens of teams and walk away from hundreds of gorgeous ideas, including a carbon-neutral fuel made from seawater.

Entrepreneurs who are charging passionately toward their vision often need to be coached to pop their heads up regularly and switch their mindset to dispassionately assess their situation. Sometimes people say to us, “You have to keep going at this because no one else will.” But that misses the point. Yes, we want to invest in far-out technologies with huge promise when they’re still so risky no one else will. At some point, though, once we’re satisfied that the technology has been somewhat de-risked, we need to test its commercial viability. If the market is as excited about it as we are, other companies will put money into it too, and we’ll keep going. But if they won’t, then maybe we’ve been kidding ourselves, and we should walk away and redirect our time, resources, and talent to more promising solutions.

One of Project Loon’s earliest prototypes

#7 Create fearless teams of chaos pilots. The lone inventor having a eureka moment is largely a myth; innovation comes from great teams. This doesn’t mean innovation by committee or consensus. It’s about committing to working together and having each other’s back, because where we’re going, we know it’s going to be dark and bumpy a lot of the time. We deliberately assemble teams from a wide range of backgrounds, cultures, and communities, so we can generate more creative ideas and ask hard questions. Former rocket scientists work alongside concert pianists and puppeteers, and marine biologists mingle with physicists and machine learning experts. Above all, we work hard to create an environment where everyone feels comfortable sharing their views and loves running toward really hard problems precisely because they’re difficult.

X is a moonshot in and of itself, but unlike most things at X, our breakthrough idea isn’t a technology. It’s our people. It’s about engineering a culture and designing an organization that can overcome the powerful forces that cause humans to retreat to the comfortable and conventional. These forces stifle any efforts to innovate and problem-solve in more than an incremental way. So I’m committed to finding a set of practices, like the ones above, that help many individuals and organizations reset ourselves so audacious, purpose-driven, team-oriented collaboration can become the path of least emotional resistance — and therefore the path to solving the many challenges facing the 21st century.

Editor’s note: we’d love to hear your tips, thoughts, and questions in the comments field, and we’ll try to address some of them in a future blog. Want more? Here’s a post from 2016 about our factory processes, a TED talk about the unexpected benefits of failure and thoughts on how to make teams fearless. In 2018, we created The Gimbal, a document we give to all new Xers that explains our ways of thinking and working, and today we’re making it available to anyone here.