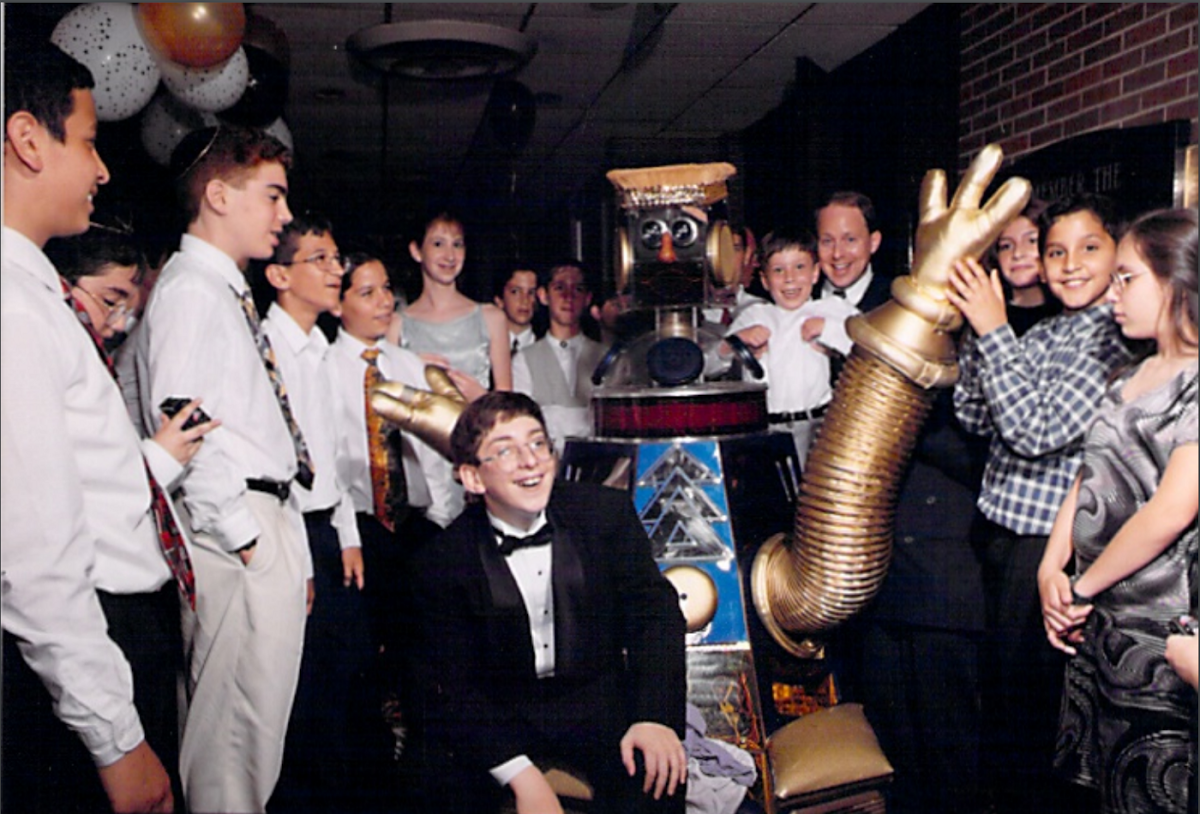 Learning from Asimov’s robot vision at 100

I inherited my love of science fiction from my father. Like famed science fiction author Isaac Asimov, he was a Jewish immigrant to New York City who had grown up behind the Iron Curtain. My dad learned English from those books. He filled our home to bursting with hundreds of dog-eared paperbacks starring robots and spaceships, but Asimov was his favorite. Maybe that’s why it seems appropriate to me that we celebrate Science Fiction Day on Asimov’s birthday, January 2nd, every year.

Asimov’s work invented the word robotics, and ignited the public imagination of robots. With his Three Laws, he created a world in which robots were reliable, beneficent, and almost uniformly — friends.

Those works shaped my childhood and much of the way that I think about robots. But in an era of increasing fears about the nature of technology and automation, that kind of optimism is easily challenged.

This is my ‘robot comedian’ from my bar mitzvah with my middle-school class.

As NPR previously noted on this day, Asimov predicted we had entered a new era of human history in which sweeping changes in technology would overturn the order of things, over and over again, within a single lifetime:

If this prediction was bold in 1972, today it is simply obvious.

I am now 35 years old, the exact age my father was when I was born. I’ve had the opportunity to work on some of the world’s most interesting and pressing problems using technologies my father could only dream about — like participating in a ‘robot olympics’ designed to push the boundaries of robot assisted disaster response, or brain-computer interfaces to allow disabled people grasp objects in their daily lives. These projects push the boundaries of how useful and accessible robots can be. When I look back on my work, I can’t help but wonder what might be possible for my future children when they’re my age — and how we can build the best possible society for them, today.

A Brain-Computer interface for assistive robotics I worked on at Columbia University.

In Asimov’s lifetime, he helped birth science fiction as an industry. In almost thirty years since his death, science fiction and its cousins in speculative fiction have come to dominate our cultural imagination. Over the 72 years of Asimov’s life, robots took over much of the rote manufacturing in industrialized nations, but today, on what would have been Asimov’s 100th birthday, robots have not advanced much beyond these tasks. Only the simplest robots have moved beyond industrial purposes to live and work alongside us.

What will it look like when robots leave their structured environments, and enter our homes, offices, and lives? And who will benefit? In “Bi-centenial Man,” a child-like, technically advanced robot lives and matures alongside a middle class family and fights for rights in a society unprepared for the implications of true embodied AI. In “Caves of Steel”, the first bewildered humanoid robot is the focal point of a vast poor proletariat’s disillusionment with automation and their technocratic overlords. It’s a common theme in these books that the technology is innocent, almost angelic, but the humans are, at best, unprepared.

My copy of an Asimov anthology containing ‘Bicentennial Man’ from around 1990.

In Asimov’s stories, society is defined by its reaction to technology, having failed to think ‘science fictionally’ — to think deeply and ask the important questions. Asking these hard questions always comes first. If we’re building robots, who are they for? How will they fit into our lives, and how can we make sure as many people as possible have access to them?

Those are some of the central questions of the Everyday Robot project. We’re working to understand the tradeoffs that we need to make to answer some of these questions. Answers like developing scalable technologies for learning, with robots that are thoughtfully designed, and with the widest array of voices that we can get in the room.

This year, as Asimov turns 100 and X celebrates its 10th year, society is getting ready for the era of robots that adapt to their environment, exist in human spaces, and are capable of doing real, useful work. I hope that a decade from now, the reliable, beneficent, friendly robots Asimov envisioned will be out there in the world. Our mission is to make sure they’re there for everybody, everyday.