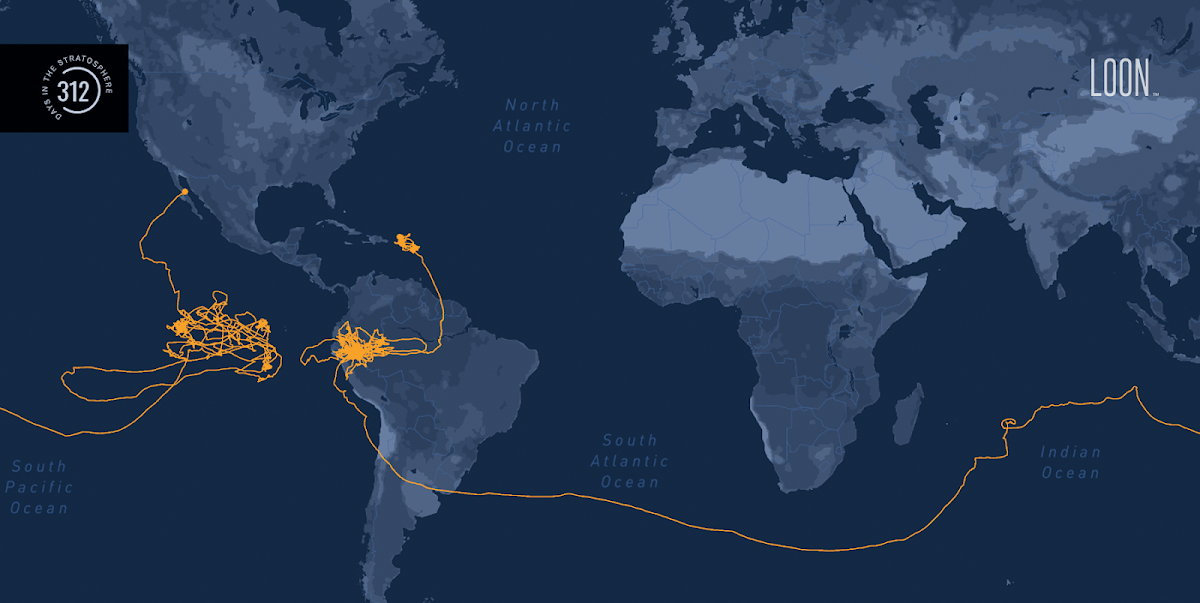 312 Days in the Stratosphere

Editor’s note: This blog was originally published by the Loon team on October 28, 2020. In 2021, Loon's journey came to an end. The Loon team have shared their flight data and technical, operational and scientific insights in The Loon Collection to support the next generation of stratospheric innovation. Thank you to everyone who supported the Loon team along the way.

What does a balloon do while drifting a year through the stratosphere? Earlier this year one of our systems set a new Loon flight duration record of 312 flight days, so we’ve been asking ourselves this question as the answer becomes more and more relevant at Loon.

HBAL703 launched from Puerto Rico in May, 2019, navigated to Peru, and then provided test service for three months. Many of our best flight systems, at a certain point, are devoted to “science”, i.e., our obsession with figuring out the secret of very, very healthy balloons. This flight system was sent south to circumnavigate the globe eventually settling over the deep Pacific Ocean to float on the winds for another seven months¹. Finally, it landed in Baja, Mexico, where our recovery team² collected the flight system for additional analysis in March, 2020.

This new duration record is exciting not because we flew one balloon for 312 days, but because it is a very visible indicator that our efforts to make all of our flight systems last longer is working.

So what are those efforts and how have we come so far? Like almost every hard problem, the high level answers are the same: 7+ years (and counting) of determination to keep improving, working both smart and hard, and a combination of a few key innovations.

Since the beginning of Loon we’ve questioned the assumptions about how stratospheric balloons should be built, trying alternative materials, varying the recipe by which that material is seamed together, and exploring different designs. We’ve tried a lot of things, and some of them have looked quite strange. In fact, some of one early homebrew balloon prototype was mistaken³ for a UFO, including one memorable sighting in Eastern Kentucky (see below).

Early "home-brew" balloons from the Loon team, some of which were mistaken for UFOs.

Over time we’ve found conventional wisdom to be directionally correct, but our experimentation, and willingness to zag where others have zigged, has uncovered some key innovations that have unlocked an ability to fly capable and long-lasting flight systems in the stratosphere. Today, our flight system looks more like a balloon-based high altitude platform (HAP) than a conventional stratospheric balloon. This is natural as Loon’s needs, including longevity and navigation requirements, are not the same as most stratospheric flyers. Our unique way of using stratospheric balloons has informed an equally unique way of designing, building, and manufacturing them at scale.

Everything at Loon gets a dose of modeling and simulation, long before the first balloon envelope film is cut to shape. Early on, we developed a physics-based design methodology to determine the high level specifications for the balloon. This helps us engineer the optimal balance of payload capacity, navigability, and longevity for the mission. Said another way, Loon balloons are tailored specifically to connect people in the places we deploy them.

At this point, most would build a prototype for testing. We go beyond conventional system engineering and use our simulation capabilities⁴ to assess the performance of these notional flight systems. Balloon lives are not normal, nerdy pun⁵ intended. By flying millions of simulated flights before we even get started on the hardware⁶, we are able to see the full range of performance for the system. For example, the plot below shows the range of temperatures we expect to see inside of one of our (very old) balloons along a very particular connectivity mission profile.

Knowing these bespoke averages ahead of time helps us fine-tune to a greater extent before we even begin to prototype. Looking beyond the average case ensures that we start out with a design that is safe and reliable, and fits the mission like a glove.

One of the big differences between most high altitude ballooning campaigns and Loon is the number of flight systems we launch. Loon launches balloons nearly every week and our current fleet size (as I write) is close to 100 flight systems aloft worldwide. As such, we need a repeatable and economical manufacturing process, and not just the ability to make a handful of balloons work.

This is why, over the years, we’ve analyzed everything from the burst pressure of the balloon at the very cold temperatures of the stratosphere⁷ (see below) to… well… fluffy socks!

Burst tests help in our efforts to design longer-lasting balloons.

Over the last seven years, we’ve worked with partners to figure out the right processes to build, ship, and handle our balloons. That’s no small task, especially when you consider that a millimeter-sized hole in the thousands of square yards of plastic used to construct a balloon could be the difference between a record setting flight and a short-lived one. Yet through collaboration and attention to detail, we’ve been able to figure out how to reliably and at scale cut, seam together in a pumpkin shape, wrap up, stuff in a giant box, and ship balloons across the country to our launch sites.

And it’s not just getting the balloons to the launch site; we’ve come a long way on the launch process. In the early days it was entirely manual and the balloon was exposed to the elements (in particular the wind) during the approximately 45 minute fill process. These days, our automated launch system shields the balloon from the wind, filling the balloon quickly and automatically without any hands on the flight system. This reduces variation between different flight systems, and overall makes sure the balloon ascends to the stratosphere in a consistently healthy state⁸.

The launch process has come a long way in seven years.

While in flight our automated system manages the balloon carefully, monitoring hundreds of telemetry data streams related to flight system performance. Automated systems estimate the amounts of lift gas in the balloon (read as: how many miles are left in the gas tank for the balloon to stay in the stratosphere) and carefully adjust the amount of ballast throughout the flight to ensure we don’t overstress the balloon film as the pressure inside the balloon rises when the sun shines on the it

The navigation system chooses altitudes that keep the balloon warm enough to stay pressurized through the night when the stratosphere is unusually cold. Our team of flight engineers keep a watchful eye on the fleet 24 hours a day, seven days a week, 365 days a year. This partnership between humans and automation ensures that our in-flight activities are as conducive to longevity as all the other work that went into the flight system prior to launch.

When a flight ends it is directed to a pre-planned recovery zone and landed under parachute in coordination with air traffic control. Our recovery teams collect these flight systems, often time traveling to extremely remote areas to do so. For example, the footage below is from a recovery in the deserts of Peru.

A balloon being recovered in the desert of Peru.

Because Loon’s flight systems eventually come home (as opposed to weather balloons which are hardly ever recovered) we have the unique opportunity to make analysis-driven improvements to our entire process. We use what is essentially the world’s largest balloon flatbed scanner (see below) to image and analyze our stratospheric balloons.

Once this imagery is recorded it can be analyzed both by humans and automated machine learning to generate data-driven insights. This has already paid massive dividends, and we hope that over time this dataset will become more and more influential in continuing to improve our system’s longevity.

So what can a balloon do for a year in the stratosphere? We use them primarily for connectivity, but we’re beginning to understand that this is just scratching the surface of the opportunity presented by the stratosphere.

My Loon colleagues have published a whitepaper discussing the massive opportunity in the stratosphere, which represents a multi-billion dollar market spanning telecommunications, high-resolution earth observation, and weather prediction and modeling. To explore these new opportunities, Loon co-founded the HAPsAlliance, a group of telecommunications, satellite, aviation, and technology companies helping to explore and grow a truly new industry.

Back to Loon’s immediate connectivity purposes, longer flight durations add up to a lower cost per flight-hour or, said another way: more opportunity to get many jobs done at a disruptive cost. Longer Loon flights let us reach and persist in places (like over the middle of the Pacific ocean) that are typically hard to remain for extended periods of time. That all adds up to being able to scale our cell towers in the sky to more people and places, and continue toward our mission of connecting people everywhere.

¹ And participate in a very exciting navigation system experiment… More on that to come.

² Loon attempts to recover every flight system and most flight systems land at pre-planned designated recovery zones so our partners, local to the recovery region, can efficiently collect them. We landed this flight system at a special place and in a special way because it turned out to be… well.. a special flight!

³ By the way, people continue to spot our balloons and think they are UFOs. Loon accounts for a non-trivial amount of reports of ovni’s (UFO, in Spanish) on Twitter.

⁵ By normal, I mean the normal distribution. You are probably familiar with this distribution from the bell curve our professors at University told us our test scores would fall into. Sometimes the normal distribution is a bad model to use, and stories of using it in inappropriate circumstances are common in engineering, e.g., this one. Given that I had to explain the joke, I’m pretty sure we both know it’s not funny.

⁶ Very soft hardware, as it were.

⁷ In the McKinley Climatic Laboratory which is, of all places, in balmy Florida temperatures.

⁸ You can see the launch site and launch system in action in this recent video on our YouTube Channel.